I’m currently developing a location-based app for iPad and iPhone, that will allow users to store locations and use custom icons and colors for the pins.

This is how it currently looks: 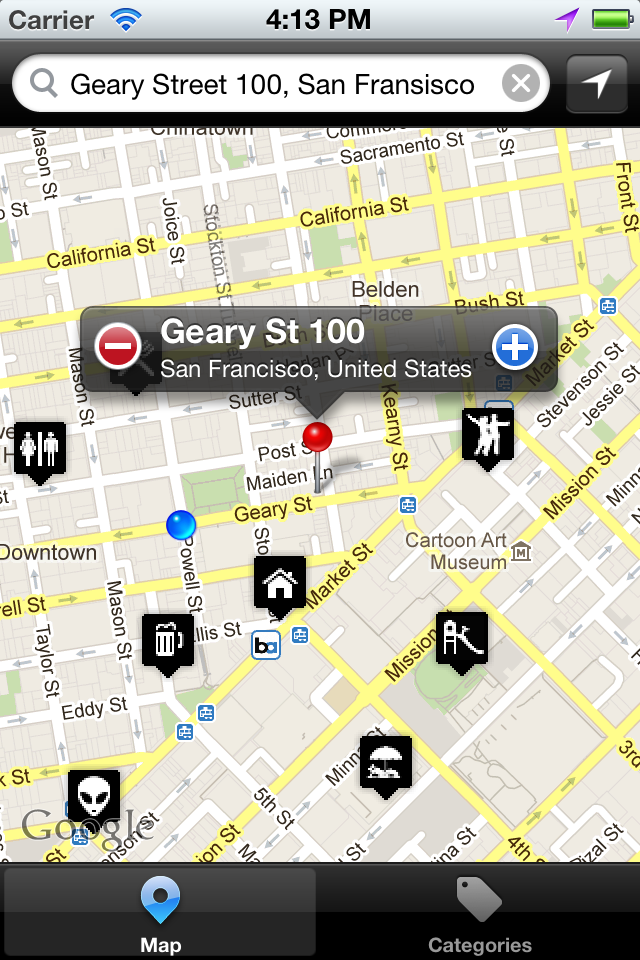 In the app, you can pin your location, pin any place by pressing the map or search for an address, which uses CLGeocoder to find a coordinate for an address.

Searching for addresses hasn’t been working great, though. If I search for a street in my current city, I get results in other towns, like Nykoping and Uppsala.

For clarity, this is the exact method body I use to kick off a search operation:

I first accepted the bad search results as a limitation in CLGeocoder’s geocoding abilities for Swedish addresses, but then noticed that the same problem occurred for American addresses as well.

As I couldn’t get things to work with CLGeocoder, I decided to return to the Google-based geocoder I used before - Björn Sållarp’s BSGeocoder. I tried CLGeocoder, since BSForwardGeocoder didn’t support viewport biasing. As it now does, I decided to give it another try.

In the app, I use an abstract protocol to define how geocoding is done in the app. This makes it really easy to switch out implementations. As I replaced Björn’s approach with CLGeocoder, I changed the protocol to use CLRegion instead of MKCoordinateRegion.

When I re-added Björn’s code, I changed my wrapper class (that implements the protocol and serves as a bridge between the app and the geocoding implementation) so it used a CLRegion as well. As I did, I faced the same behavior using Bjorn’s implementation.

So, Björn’s geocoder used to work, and now didn’t. Considering that, I realized that the only difference between the old and new implementations (except that the library was updated a bit by Björn) was that I now used CLRegion class instead of MKCoordinateRegion.

I therefore decided to inspect the resulting CLRegion value in the code above, and now noticed that the center lat/long was zero!

How could this be? I verified that the user location was not zero, so how could the resulting CLRegion have a zero center? Reading the documentation, I found the answer:

The identifier must not be nil!

So, all this was due to the fact that I used a nil identifier, but the app never gave me so much as a silent warning about this. If I pass in nil as an identifier, which I did:

Instead, I end up with a valid CLRegion, but with invalid properties. Talk about crashing silently.