Scheduling NDepend for a set of solutions
Oct 5, 2011 .netcode-quality

In a project of mine, I use NDepend to continuously run a scheduled code analysis on a bunch of solutions that make up a large part of the software infrastructure of a major Swedish company.

By scheduling these analyses to run once a week, using previous results as a baseline for comparison, it will be easier to detect patterns to avoid and pin-point good practices that we want to embrace.

Although we use Team City as build server, I have setup these scheduled analyses to run from my personal computer during this first test phase. It’s not optimal, but will do for now.

The analyses are triggered from a simple bat script, that does the following:

Once I had the script, I scheduled it using the Task Scheduler. I set it to run every Monday at 08.30. Since it runs from my computer, I have to be early at work, but with two kids at home, I always am 🙂

This setup works like a charm. The analyses runs each week and everyone is happy (at least I am). Already after the first analysis, we noticed some areas that we could tweak to drastically improve the architecture, reduce branch / merge hell, avoid code duplication etc.

During the setup, the bat script sometimes couldn’t get NDepend to launch. If the code was unchanged, NDepend just wouldn’t start. The solution was however simple. Under Tools / Options / Anaysis, you can tell NDepend to always run a full analysis: 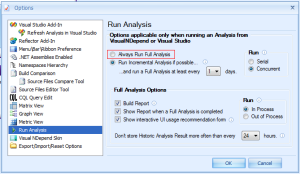 In most cases the default setting is correct, since it will run a full analysis at least once per day. However, in this case, I decided to keep the “Always Run Full Analysis” option selected.

One remaining problem is that NDepend sometimes incorrectly complains that the solution DLLs are invalid. The last time this happened (after a major architectural change), I couldn’t get it to work even by deleting and re-adding the DLL:s. NDepend still considered the DLLs to be invalid.

To solve this, I had to delete the NDepend project and re-create it from scratch. It’s not ideal, so I hope that I will find a solution for it.