This is the fifth part of my sum-up of Øredev 2011. These sum-ups waere supposed to be rather short, but have grown out of proportions. I will try to keep it down.

Greg Young – How to get productive in a project in 24h

In his second talk, Greg Young talked about how to kick-start yourself for a new project. First of all, as a consultant, do you understand what the company does? Have you used your their products or services before? If you have no understanding of these fundamentals, how will you deliver value?

Greg described some tricks of his to get started quickly. He usually starts off by inspecting the CVS. Projects that have been around for a while and still have tons of checkins, could possibly be suffering from a lot of bugs. A certain area with a massive amount of checkins could possibly be a bug hive.

So, looking there could quickly tell you where a project hurts. Naturally, a lot of checkins don’t have to indicate bugs or problems. The team could just be building stuff. However, at the very least, many checkins does mean that people are working in that part of the project.

This is a very simple step, but will make you able to discuss the project after just an hour or so with the CVS, and maybe even pin-point some problems. This will give your customer the impression that you are clairvoyant (or at least that you know what you are doing), which is why they pay you.

If the project doesn’t have continuous integration, at least set it up locally. It doesn’t take long and will help you out tremendously. To be able to react when someone breaks the build, the second they do it…well, at least it gives you pleasure.

Greg then demonstrated how to dig even deeper, using NDepend. His demo was awesome and showed how to use various metrics, like cyclomatic complexity and afferent/efferent coupling, various graphs that make NDepend great, then told us to keep an eye out for black squares in the dependency matrix (they indicate circular references…bad) and rigid couplings (they should be broken up).

All in all a great session that gave me a lot of things to aim for when holding presentations myself. As a consultant, you shouldn’t miss this video.

I won’t attempt to cover everything in this keynote. Instead, watch the video. It’s filled with fun gems, like when Jeff describes how things that are accepted in a web context would be really strange if applied in real life. For instance, Facebook lets you keep a list of friends. Who has a physical list of friends?

Jeff then talked gamification and how we can design our services like a game, by defining a set of rules that describe how the service is to be used, then reward those who adapt the rules and punish the ones that do not. The basic premise is that games have rules and games are fun, so if we design our services as a game, they should become fun as well. Right? Well, not necessarily.

However, at least rules tell us how we are supposed to behave. It doesn’t work for all sites or services, but for social software, it should be considered. Games generally make social interaction non-scary, since everyone have to conform to the rules of the system.

When designing Stack Overflow, Jeff and Joel therefore did so with gamification in mind. You may not notice it at first, but everything is carefully considered. For instance, people used to complain that you can’t add a new question at the start page. This is intentional. Before you add a question, they want you to read other questions, see how people interact and learn the rules.

Stack Overflow adapts several concepts from the gaming world. “Good” players are rewarded with achievements and level up as they progress. The site has tutorials, unlockables etc. Without first realizing it, Jeff and Joel did end up creating a Q&A game that consists of several layers:

This makes it possible for Stack Overflow to allow anonymous users, unlike Facebook who decided to only allow real names in order to filter out the “idiots”. Since Stack Overflow awards good players, bad players are automatically sorted out. The community is self-sanitizing. People are awarded with admin privileges if they play good enough. It’s just like Counter Strike, where you have to be a team player. If you are not, the game will kill you 🙂

I could go on and on, but I recommend you to watch the video instead.

Tim has worked with (not at) Microsoft for a loooong time and is one charismatic guy, I must say. What I really appreciated with his session was that it seemed a bit improvised, unlike most sessions at Øredev.

What I didn’t like quite as much, was that it seemed too improvised. Due to lack of time and hardware issues, Tim failed to demonstrate what I came to see: HTML5 applications with VS11.

Tim begun with stating that he hates HTML, but loves HTML5, which is now “crossing the chasm”. This means that it’s a safe technology to bet on, simce it will be adapted.

How do we know this? Well, this graph illustrates when a technology is “crossing the chasm” in relation to how people adapt it: 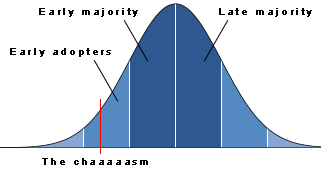 Tim thanked Apple for inventing the iPad, since thanks to the iPhone and the iPad, Flash and plugins are now out and HTML5 is in.

Large parts of this talk were fun anecdotes, like when he talked about how Adobe once published a “we ♥ Apple” campaign, to which Apple responded with “we MISSING PLUGIN Adobe”.

Tim went through some browser statistics, explained why IE6 is still widely used (damn those piracy copies of Win XP in China) and concluded with some small, so-so demos.

Tim started this talk with Natural User Interfaces and some new features in Windows 8, like semantic zoom, a desktop mode behind Metro (looks just like Win 7), smart touch and a new task manager (he was kinda ironic here).

Tim demonstrated Tobii on a really cool laptop with two cameras, which allows it to see in 3D. The rest of the session was…enjoyable. I cannot put my finger on it, but I had fun, although I was disappointed by the demos. The Kinect demo was semi-cool, where Tim hinted that the new XBOX Loop and a new Kinect will become a small revolution.

I really don’t know what to say about this. Watch the video. You’ll have fun.