I could use some advice regarding a project I’m currently working on. It’s a web site where people can sign up and join various groups (did I hear a “Facebook is already doing that”?) and do stuff depending on what groups they belong to.

The purpose of the web site is not important, nor is the big domain model. Let’s ignore all complexity and focus on the Member and Group entities.

Before we begin, I am going to talk about interfaces in this post, since the project is written in C#. In Objective-C and Swift, the equivalence of interface is protocol. That is, a way to design for the what’s and not the how’s.

In this project, I have a repository interface for each entity. The repositories main implementations have the sole responsibility to hide Entity Framework from the rest of the system. I also have other repository implementations, e.g. fake ones that just create fake data, cache decorators etc.

I then have service interfaces (I know, I know, bad name) for more sophisticated functionality. Each service uses one or several repositories, which means that a repository can be really simple and just provide data from a certain data source, while a service can do more sophisticated things with this data, without having to know or care about from where the data comes. It also dramatically simplifies unit testing.

The controllers in the application will then use the various services to do stuff. Controllers can talk to services. Services can talk to each other and repositories. Repositories can not talk to anyone else.

This architecture can be illustrated (quite simplified) as such: 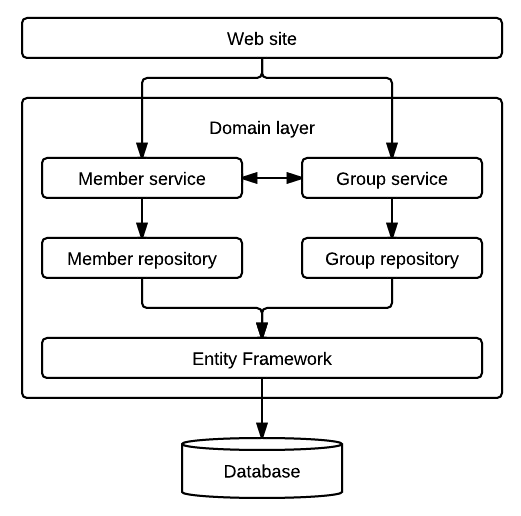 Now, here is my dilemma…where do I put additional logic? Say, for instance, that I want to find all members that are in the same groups as a certain member.

There are pros and cons will all the approaches above:

I started placing the methods in the entities, trying to be a good OO programmer, but the responsibilities of the entities then grew and grew.

Now, I have all my relation- (is X a member of Y, does X know Z) and permission- (can X edit Y, can X invite Y to Z) -related logic in the various services. It’s quite nice, but in some cases, I find that the services have to evaluate data in really non-optimal ways.

There are tons of various solutions to this problem. I would just really like to discuss this. If you have found a way that works for you, please share 🙂