To grow as a developer, there’s nothing better than to invite others to criticize your potential flaws. This post will expose my shortcomings as a unit test loving developer. Enjoy!

In real life, aiming to be a pragmatic programmer, I aim to do what is “best” for the project, even that means releasing a project with flaws instead of polishing it to perfection. In hobby projects, however, I more than often find myself striving for perfection, where this strife often proves folly in hindsight.

I now suspect that I have become trapped in another bad behavior – to unit test everything. At its worst, I may not even be writing unit tests. I thus invite all readers to comment on if I’m out of line here.

This setup works great. However, as I add more specific implementations, things become a bit nasty.

Consider extending the service model above with an service implementation that sends out e-mails when an invite is successfully created:

How can I ensure that this test class only tests the e-mail extensions in this new service?

Let’s take a look at the EmailSendingGroupInviteService class.

The e-mail sending part is not yet developed. 😉 As you can also see, the methods only call the base instance.

Let’s take a look at the EmailSendingGroupInviteServiceBehavior test class. 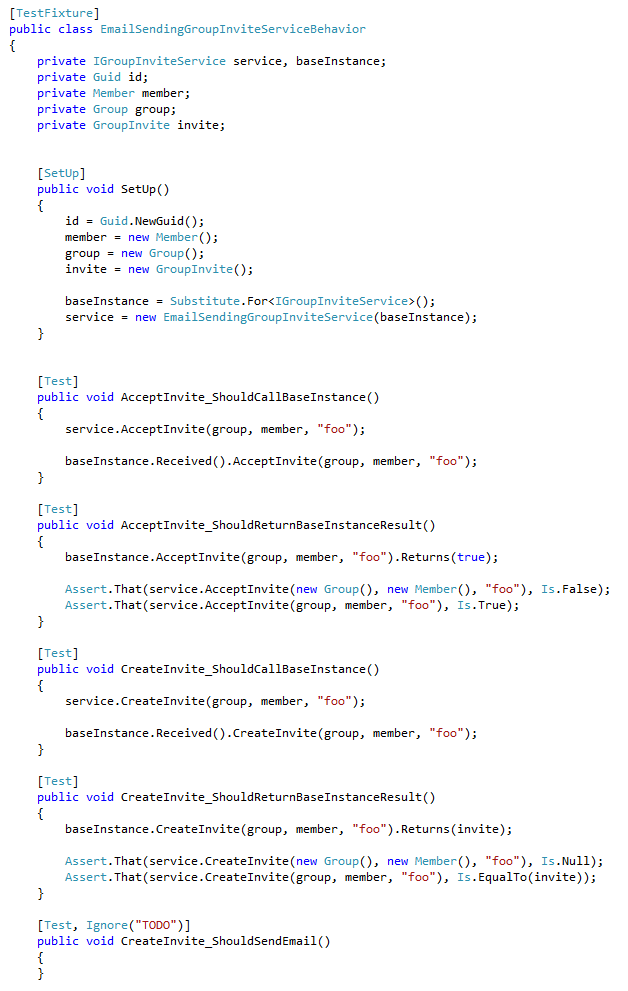 Testing the decorator class like this is time-consuming, and for each new method, I have to write more of these tests. I want to ensure that the base service is properly used, but I really hate writing these tests.

Wouldn’t it be better to only test the stuff that differ, i.e. keep the CreateInvite_ShouldSendEmail and skip the rest? Let me know what you think.